Right now it feels like an open secret that AirPods are more monumental than they seem. It’s not another bluetooth gadget we’ll forget about in 6 months. It’s our first taste of transhumanism.

I’ll never forget showing a friend my pair for the first time. He sampled a song, shook his head like a madman, and was stunned they stayed in.

Then he swiftly declared, “We should skip straight to cochlear implants!”

For AirPods, it not just a smaller computer on your body. They elicit a comparison to biohacking. You can imagine AirPods will soon become a lo-fi neuralink or lo-fi augmented reality, except it’s here and now.

So far, though, the functions they serve haven’t changed a ton. It’s mostly just stuff we did with wired headphones. But I’m betting it will soon change. And here’s why:

(PS-if you know anyone interested in building something here, I’m working on a side-project LMK)

The latest estimates say 52M pairs will be sold in 2019. If you compare that to the historical device trend, we’re currently talking about iPad-in-2012-level adoption but with even greater growth potential. 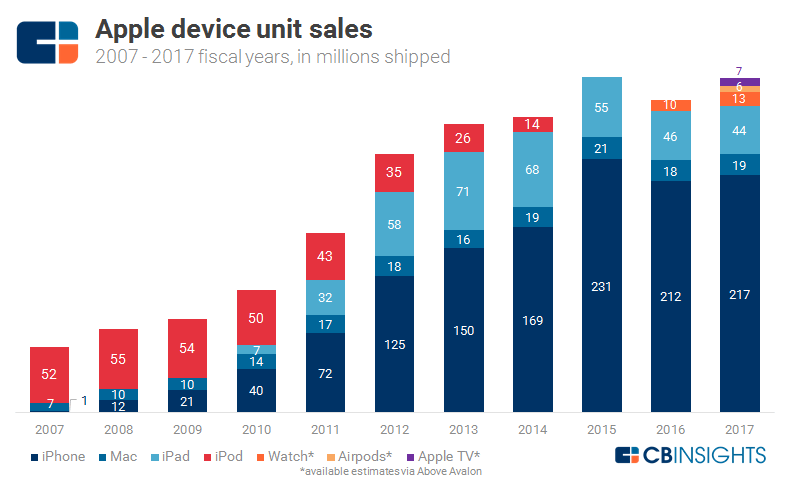 2. There may soon be an AirPod-first ecosystem (though developers tell me the reality remains far away)

Megan Maloney from General Catalyst recently tweeted that there’s likely going to be a wave of airpod-first startups:

On the other hand, I know a developer who is much less optimistic. This iOS expert told me the developer functionality around Siri is extremely limited (right now, there’s only 11 types of commands that can be devloped with SiriKit). My friend says unless they can make Siri a lot better and introduce a better dev kit, they’re “not expecting an airpod app revolution any time soon.”

3. Audio is coming to the Enterprise

Marc Andreessen highlighted in a talk that audio is consumed increasingly at work:

“Audio is on the rise just generally and particularly with Apple and the AirPods, which has been an absolute home run [for Apple]. It’s one of the most deceptive things because it’s just like this little product, and how important could it be? And I think it’s tremendously important, because it’s basically a voice in your ear any time you want….everybody’s kind of wondering where people are finding the spare time to watch these YouTube videos and listen to these YouTube people in the tens and tens of millions. And the answer is: they’re at work. They have this Bluetooth thing in their ear, and they’ve got a hat, and that’s 10 hours on the forklift and that’s 10 hours of Joe Rogan. That’s a big deal.”

I can attest that it’s a big deal. My office is increasingly a sea of airpods.
Related:

Many people credit Fortnite with being a triumph of audio-based social networking. Truth be told, it’s nothing new (I’ve used gaming headsets for chat since COD 4, which, to date myself, came out in 2007). But Fortnite is such a powerful destination as a ‘metaverse’ that the audio aspect feels monumental. It has, as Jordan Cooper wrote, unlocked a new form of presence. It feels so natural, so human, all while running around in an entirely synthetic world.

An update the other week from VR startup High Fidelity indicated this is going to be of continued importance. The company, which was struggling to make a dent with the tepid VR headset adoption, set out to work from home and create something new. The result? I’d describe it as a Fortnite island for work.

So, while we wait for HMDs to go mainstream, what do we do instead? Are there ideas that mix HMD users with non-HMD users, as we’ve already seen with playful social apps like RecRoom and VRChat? In considering different ideas, we conducted an interesting experiment. We have two offices, in SF and Seattle, as well as a number of remote workers. For two weeks, we sent everyone home, with their computers, and created a private tropical island where we could work together all day, mostly wearing headphones but not HMDs—we didn’t prescribe the medium of use.

Within the first couple of days it was obvious we were onto something. The 3D audio was always on, perfectly realistic and comfortable. We found ourselves walking around and interacting with each other the same way you would in a physical office. We put up whiteboards and spaces for teams. Everyone felt better connected, remote workers felt less lonely, and people who didn’t sit together IRL got to know each other better. Meetings ran much smoother than when the unlucky person had to join with video conferencing. Although we sometimes used HMDs—for example at our company all-hands meetings—we almost always used just headphones. And we had fun too, with emote animations, impromptu dance parties, and even happy hours.

All that was needed to create ‘presence’ for remote work was their 3D audio engine, which is telling.

Years ago, I was super jazzed about what the Amazon Echo could bring. I was imagining Alexa reading me work-related info, interrupting me for important messages, and generally being smarter.

But several years since, Alexa has failed to do much besides tell me the weather while getting dressed. I’ve been surprised how slow progress has been here, but alas it’s very difficult to get machine learning better on the margin (once you’re at 90% accuracy, it’s exponentially harder to get to 95%).

However, I obsess about that moment in ‘Her’ when Joaquin Phoenix and the OS dive into the task of deleting emails together. Could there be a lo-fi way to approximate that with headphones and today’s voice tech?

That's why the future depicted in 'Her' feels so plausible.

10X-ing the 'throughput' in PCs won't soon come from a Neuralink or Minority Report gesture band.

It'll be an OS with a personality that pushes us, that proactively serves up tasks ("hey, let's delete some emails") pic.twitter.com/qDBsTbUOJy

6. Health & biometrics are on the way

Details here are scant, but patents indicate future AirPod iterations will have heart rate and body temp monitoring. As I explored in the Apple Strategy Teardown, healthcare is the next big vertical for the company. How effective these biometric sensors are in-ear remains to be seen (based on how continuously they’re worn etc), but the patents show Apple is at least thinking about melding healthcare/biometrics with audio

Podcasting media has exploded. But in that rush, some of my favorite podcasts still have awful audio problems. I agreed wholeheartedly with this thought:

Picks and shovels are still needed, and will be even more important once AirPods get noise cancelling.

9. Artisanal internet may be coming soon – ie, the cheapening of everything, from content & info, to web services – implies we may be overdue for a gourmet, curated version (similar to the paleo diet)

Now, this may be a stretch. But indulge me in reading this passage from the Kneeling Bus blog:

From this perspective, the evolution of the internet to date can be understood as merely the first phase of the cycle, with the artisan phase coming next. The things that internet platforms currently deliver more efficiently than the systems they replaced — everything that feels suddenly overabundant now — can, through this lens, be understood as a standardization of information to facilitate its mass distribution. This is true of social interaction, “content,” and even knowledge itself. The bounty is currently so overwhelming that it feels like a pure improvement. How dare we complain that Netflix degrades the experience of watching a single movie, when it offers us an inexhaustible quantity of movies relative to its predecessors.
Look at how our attitudes toward food have evolved: While industrial food production massively increased the carrying capacity of the human race, the food was generally lower quality, and more recent movements like the paleo diet emerged as the more expensive (artisanal) corrections to those long periods of standardization. Now we can imagine, and see the beginnings of, a similar pendulum swing in our attitudes toward everything that software has eaten. What will the digital paleo diet look like?

Audio seems like the perfect delivery method for “gourmet” internet. It’s can be almost as ‘high-throughput’ as reading but with far less effort.

10. The memes have shown AirPods have hit escape velocity

It’s almost as if Apple had hired its own viral marketing team to blast pro-AirPod propaganda. There’s now a genre of meme called ‘AirPod Flexing‘ which characterizes its users as superior, wealthy royalty. Many of them even are pretty funny.